No, You're Too Tired

One of the difficulties of parenting a toddler when you’re a middle-aged dad: your own level of energy and endurance relative to the three-year old powerhouse.  In my case, my mind is often willing, but the body is weak.  There are other times though when my mind is not willing.  I come home from work mentally and emotionally drained and tired even though I’m not physically tired.  Paul wants to play, my body is willing, but my mind is weak.  It’s at times like these, when I’m mentally tired, that I’m reminded of my own childhood, and I see my parents in myself.
I don’t know how often the following happened, but it was often enough that this particular memory is strong.  I would come home from school, or on a weekend would be home for lunch or dinner, and then ask to head out to play.  The dreaded answer would come:  “no, you’re too tired.” 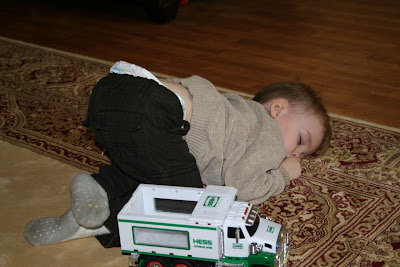 I remember thinking to myself, and at times saying, “I’m not tired!”  Why would Mom or Dad say that?  Sometimes I would persist and things would go in my favor--look out neighborhood, here I come!  Other times I’d keep asking and things would end badly; I’d spend the rest of the day or evening at home avoiding an angry parent.  It didn’t take too many years for me to figure out why I was told I was tired: parent speak.  Oftehn when Mom or Dad would say, “no, you’re too tired” they actually meant, “no, I’m too tired to keep up with you.”  Not that they’d go out and play with me at that point in my childhood, but they still had to expend mental energy to keep track of me.  It was easier just to keep me in the house.
Thankfully this wasn’t the norm.  I have fond memories of lots of time spent outside during my childhood years, and I certainly can’t blame them for being tired.  Adult life is tough and tiring and parenting seems to add to that exponentially.  But it never sat well with me that they didn’t just say, “no.  I don’t want you to go out right now.”  I’m sure I’d have still asked them why, or just complained for a while, but I have to believe it wouldn’t have been much different for them than the continued asking or complaining that came from me after a false reason I was given.  To be fair to my parents, I know now as a parent that there are times my son is tired and he doesn’t know it.  Or he doesn’t understand why it’s significant that he’s tired even though he wants to press on with his playing.  No doubt this was true of me.  I can’t contest those times, and I’m not sure I even remember them--probably because I was truly tired!  But there were still many times that I was told “no” because I was tired, and I actually wasn’t.
So what’s the point?  Well, for one I understand my parents better.  I already find myself tempted to tell Paul “no” and catch myself thinking it’s because he’s tired.  He may be, but there are definitely times that what actually motivates my reflexive answer is that I’m tired.  Second, and perhaps a more important point though is I also remember as I grew older, it colored my view of the sincerity of my parents’ words in certain circumstances.  Did it change my overall trust for my parents?  No.  Did I grow up questioning their integrity?  Absolutely not.  But there were moments that I know I wasn’t being answered honestly and it influenced how I learned to make requests based on whether or not I thought my parents were actually tired.
I suspect there’s no way to avoid this kind of thing--it’ll happen in some way as any parent interacts over time with their child.  It may not be the specific issue I’ve discussed, but it’ll be something.  Child wants to do something; parents are tired and say “no.”  Honestly, in the end there’s nothing about this memory for me that has tainted my view of or my relationship with them in any way.  But it challenged me then, and continues to challenge me now because I’m the tired parent.  I don’t want to project my own state of mind on my son and deliberately try not to now.  If I’m tired, I need to tell him that.  Or tell him whatever the right answer is rather than telling him something in haste of out of convenience that I know isn’t true.  He’s smart, even at three.  He’ll hit the age very soon when he’ll know with certainty that no matter what my reason is, I can’t tell him it’s because he’s tired when he’s not.  He’s ready to conquer the world in spite of me: his tired, old dad.  And you know what?  As tired as I often am, I love the fact that my son is young and is enjoying the benefits of good health and his youth!
It’s great to be a dad!
Posted by J.P. at 11:09 PM