This post was submitted by Kristina, a military officer and colleague of mine, in honor of her dad.  He recently passed away.  She penned these words on September 24th, 2009 and shared them at his funeral.  It seems appropriate to post her words, unedited, for Fathers Day.  Read on as she honors her dad:

I just wanted to start off by saying that Dad asked me to do this a couple of weeks ago. I knew it would be hard, but how could I say no? Dad also asked me to talk about what he meant as a naval officer. Unfortunately, I didn’t really know him when he was a naval officer, so I’d like to defer to (my Dad’s friend), who’ll be following me. 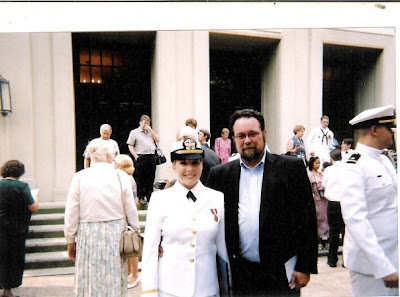 The very last conversation I had with Dad – the day before he died, his words weren’t very clear, but I could tell what he was saying most of the time. I told him I loved him, and he told me he loved me. I asked him if he was in pain. He said no. I asked him if he was okay. He said “Yeah....really…truth.” I also prayed with him. I said an Our Father and a Hail Mary, and read Psalm 23 to him, as I had done a few times before – he liked that too. Mom had told me that Dad needed permission from Melissa and me to move on. I told him it was okay for him to sleep forever, and that if he saw a bright light to go after it. Dad also responded to me later that day – as I was leaving for the night, I kissed him on the cheek and told him I loved him. His eyes opened immediately. I told him I loved him again. He said “I love you.” Even though it wasn’t very clear, again, I knew exactly what he was saying.
He also responded with smiles when his pastor came and prayed with him, and when his siblings called him and we held the phone up to his ear.
The night Dad died, I was writing in my journal. I was jotting down as much of our last conversations as I could remember, and I had written another prayer for him. I thought I would share it:
Written Sep 21 2009:
Lord, I pray Dad has a painless and speedy transition into heaven, and that he becomes a Guardian Angel like he said he wants to become. Of course, my first choice is that Dad be cured and wake up just fine. My second choice is to put my Dad’s soul at rest and to end his suffering.
Now, Dad liked big parties, fancy dinners, and flying first class. He asked me to toast him. Dad would want us to make a big deal out of this, in a good way. So let’s make a big deal out of it. I think a lot of “I remember when’s” followed by laughter are in order. God be with you all.
Posted by J.P. at 9:19 AM