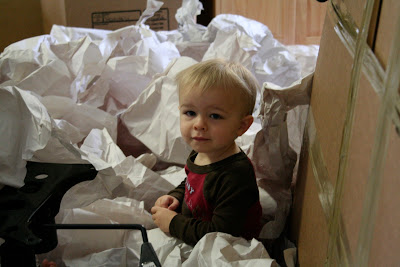 We should move this Summer, sometime in the next six months.  Steph and I are already talking about it with Paul.  We moved the first time with him when he was one and a half and he has no memory of it.  This time, he’ll be four and a half.  He has a small circle of friends here.  He knows what it means to get on a plane and travel, but we’ve always returned to Germany--the only place he thinks of as home.  We’re already anticipating him asking to see his friends or to visit places here in Germany once we make our “permanent” move.
Steph and I have started doing the same thing with Paul that my parents used to do with me: taking about the pending move as an adventure.  He hears us talk with each other and with him about the amazing chance to get to see another new place, more cool stuff and to meet new friends.  We don’t talk about who and what we’re leaving behind, especially from his limited perspective.  When I was small, moves seemed so final, but life became an adventure and we still get to experience quite a bit of it through airplanes and automobiles.
After spending my entire life in military service, I’ve learned the world is small and getting smaller every year.  We have friends we continue to cross paths with because we’re assigned together again, or simply because we visit one another.  Paul will continue to see many of them too, and unlike my young life, there’s a good chance we’re only an assignment or two from retiring and truly settling down.  Paul will still have the greater part of his youth spent living in one place, with all the associated pros and cons.  As for us, we won’t mind taking him back to see the places and meet the people we’ve enjoyed over the years.  The adventure will continue!
It’s great to be a dad!
Posted by J.P. at 8:23 AM