We’re there.  We arrived there sometime during this last year and we can’t seem to leave.  Where is “there” you ask?  We’ve found ourselves in the “why” zone.  We’re not surprised; we knew it was coming. 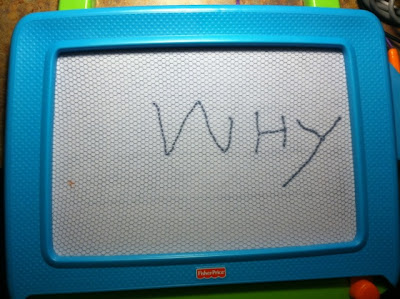 This will bring back memories for those of you with kids who passed through this stage.  For those with kids on the way, or with kids younger than ours, this might help you prepare for...why.  It goes a little something like this:
Me:  Son, stop standing on the couch.
Paul:  Why?
Me:  You’ll fall off.
Paul:  Why?
Me:  Because you’re not being careful.
Paul:  Why?
Me:  I don’t know why, but we don’t stand on the couch anyway.  You don’t see your mom and I standing on the couch.
Paul:  Why?
Me:  Because it’s not proper to stand on the couch.
Paul:  Why?
Me:  Look son, gravity and I are the law; we must be obeyed.  Get down.
Paul:  Why?
As you can imagine it goes on without end, or until my wife or I break the conversation.  We do our best to avoid the dreaded “because I said so,” but have invoked that on rare occasion.  Let’s face it, we all hated it as kids, it was probably overused by all of our parents, but when it comes right down to it, it’s a good enough answer at times.  Parents have authority over their kids and sometimes that’s all the child needs to know.  That said, I’m still not a fan of “because I said so” as the primary reason for everything.  I think one of the most important things I can do for my son is offer explanations for things, hopefully in a manner that resonates with him at his age.  I think that reinforces the reasons behind what I say, and builds confidence and trust in my son.  Later, when I tell him something and time or circumstance doesn’t permit an explanation, he’ll accept the short answer knowing that his mom and I don’t give him guidance that isn’t thought out.
But back to the current game of “why”.  As the game has unfolded this year, I’ve learned to tell (most of the time) when my son is asking a genuine question and when he’s playing.  Yes, it’s actually a game for him at times.  This became clear when, one day as I was turning to him to make it clear I was tired of answering why about everything I was telling him to do, I saw it:  the grin.  So I continued a little longer and sure enough, every time I answered him, he grinned and asked again, “but why?”  My frustration evaporated.  Why?  Because there aren’t too many things cooler than seeing your young son’s sense of humor develop.  It brought a grin to my face then, and even now.
It’s great to be a dad!
Posted by J.P. at 3:20 PM