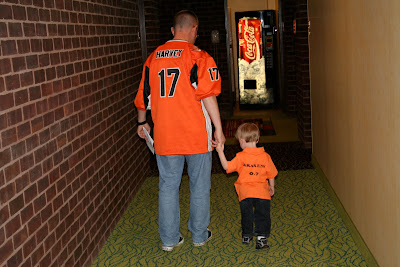 I Didn't Get the Memo

Being a first-time dad as a middle-aged man has been interesting to say the least.  It's never been bad, but definitely interesting for a variety of reasons.  One of the oddest things that’s stuck with me for the three years of my son’s life as been a question that’s come my way on too many occasions.  After someone finds out my age (45 this year), they ask, “so was it on purpose?”  My response has been consistent:  of course, there’s no such thing as accidental sex.
OK, I know what I’m actually being asked, but I don’t really like the implication, even when the question comes from someone who's close enough to my wife and I that the question isn’t offensive.  It’s as if a memo went out from the Men’s Department to all the middle-aged guys informing them they shouldn’t have kids after they enter middle age, and it appears I crossed the threshold and recklessly dismissed the memo's authoritative guidance.  Or perhaps I just didn’t receive it.
Being a dad at any age is special and there are certainly uniquely special things about being a dad at different times in your own life.  With my wife and I, we made a deliberate decision to sacrifice our younger years (with all the associated strength and energy) to build an environment at home that would allow us to more comfortably raise a little one--primarily in two areas:  our own maturity and financial stability.
So putting the oddity and perhaps the improper nature of the question aside, I love being a dad.  I mean I really LOVE being a dad, more than I could have ever imagined.  No regrets.  I see and feel my own bodily limitations and know that these wouldn’t be issues if I were a twenty- or thirty-something, but that’s OK.  I still see the world again through the eyes of my three year old son--at times causing frustration for my sweet wife who feel she has two three year olds.  I might be a bit slower (or more cautious) but there isn’t anything I can’t do with my son.  Maybe in 10 years he’ll be able to break my hip, but for now, I’m OK.
Here’s the real bottom line--if the time is right, it’s never too late to be a dad.  Compared to the gain, you lose nothing except perhaps a slice off the ego when folks ask the strangest question, or as you anticipate being in your 60s when your child is graduating from high school.  I’m OK with that though and suspect that most of you other dads out there are too.  For those of you who worry about having a first (or another) child as a middle aged man, I’m your champion.  Go for it!  Who knows, I just might have to thumb my nose at the memo crowd and have another myself.
It’s great to be a dad!
Posted by J.P. at 2:44 PM 1 comment: