This may be the most difficult thing I’ve ever written.  Just a few weeks ago my son surprised my wife and I when he suddenly looked sad and said, “Dad, when I’m big like you and I have a son like you do, I’m going to miss you.”  I asked him, “Why will you miss me?”  He explained that when he’s big I’ll “be in my skel” and he won’t be able to see me anymore.  When he says something is a skel, he’s referring to it being a skeleton--being dead.  My young son was now somehow aware of death and the loss it brings. 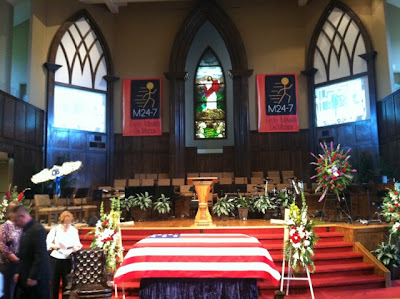 On the 18th of August my wife, son and I boarded a plane in some haste and flew to Madison, Mississippi to be with my dad.  His was in the hospital and his health was failing quickly.  We were all able to see him.  I spent all day on the 19th sitting and talking with him, and to the best of my ability, comforting him as he was in and out of sleep.  Just a few days later, he passed away.  My mom and I were with him and it was the most heartbreaking and tender of moments.  We had both shared our thoughts and words of encouragement with him, ensuring he knew we were there and okay, and that we loved him.  Mom was sitting by his side holding his hand and I was standing over him from the other side.  I had just finished quietly speaking into his ear, I kissed his forehead, and he left us.  His departure was quiet and graceful.  It was honorable and dignified.

What made that moment most special to me as his son were those final words I shared with him.  They weren’t private or new to his ears, and were words I’ve said to him and to others about him before.  I quietly and humbly told my father this:

Just seconds after I said these words, he died with my hand on his shoulder and his hand in mom’s.

As we made the trip to Mississippi, we told our son his grandpa (who he called “G”) was very sick.  Once we were there, I took time on several occasions to help him understand that he wouldn’t get to see G again, including one brief but significant father and son walk.  Steph and I didn’t want to hide this from him, nor did we want to make death some sort of fiction, and we struggled with how to best do this, knowing there isn’t a “right way.”  We were confident that our son was mature enough to see his grandfather as sick as he was, to grasp the basic truth of the reality of death (especially after his earlier statement), and to learn that the death of the body is as much a part of life as birth and everything in between.  He was with us during the visitation and memorial service, handled everything very well, and touched our hearts dearly when he solemnly snuggled Steph and told her sadly, “I’m going to miss G.”

As a son having just lost his dad, I was able to draw very real strength from having my son with me through it all.  It was special that we could share it, with me carrying the heaviest emotional weight of the loss for him, and as a dad experiencing the very real love and tangible support from my own son.  I also had the privilege of giving the eulogy at dad’s memorial service--truly the hardest thing I have ever had to do.  I can’t imagine anyone else having done it and while it felt like I was speaking without any oxygen in the air, it was also medicine for my own soul.  In the end, during the trip my son was able to see his grandfather purposefully for a last time, see the sorrow in my heart at the loss of my father, and hear the words I offered in a meager attempt to honor him--his grandfather--in front of his gathered friends and family.

We will bury dad at Arlington National Cemetery sometime later this year, and we will be there with him--father and son--to give dad one final goodbye as our country lays him to rest with full military honors.  I know I’m biased, but I think it’s the best thing my grateful family can do for this amazing and quiet man who gave everything he had to us, to his country, and to his community.  He served us all well, with honor, integrity and humility, and it showed to anyone who looked.  I certainly learned from his example and trust my son has too.  Among everything else, my job now as a father is to do my best to ensure my son continues to learn the same lessons of honor, integrity, humility and service, hopefully through my words and deeds.  It’s not easy, but what an awesome task.  And there’s no better way I can think of to continue to honor my father than by raising my son--his grandson--well.

Here are the links to my father's official military biography and his obituary.  His obituary captures his career after his retirement from the military.