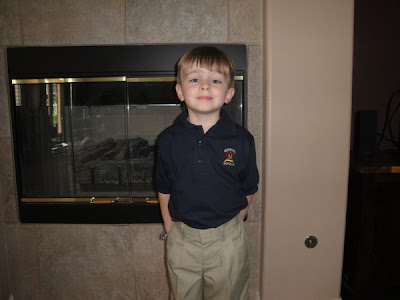 Please don’t misunderstand.  My wife and I are both the products of public schools and neither of us have a problem with Paul attending one, unless it’s clear the curriculum and/or teaching isn’t up to a standard we expect to be met.  Obviously that becomes a constant decision as Paul moves from grade to grade and school to school.  In Germany he attended a private kindergarten with what I can only call a mini-liberal arts curriculum.  They had reading, writing, math, sciences, language and fitness as a part of the schedule.  He did well and we wanted him to continue with something similar.  As a result we found ourselves looking at private education options.
The added benefits are continued exposure to the rigor and discipline of the education process he’ll see as he advances in his education, a relatively small class size, a nation-wide accredited curriculum, and one other bonus I don’t mind at all: the students wear school uniforms.  While I don’t see wearing school uniforms as a black-and-white issue, it undoubtedly visually adds to the students’ perception of a level paying field, removes the distraction of differences (especially for young children), and sets an overall tone or mood within the student body.  Besides, the uniforms aren’t stuffy, nor do they attempt to make these young kids appear older than they are.  They’re just kids in school uniforms designed for kids.  I’m okay with this.
So our little man began his adventure within the formal education process in America today, hopefully setting the stage well for a lifetime of learning.  And no doubt, just as with everything else about his life so far, I’ll find myself reliving (and relearning) the things of my own youthful years.  If I can keep him in schools built on solid and proven  curriculums, and keep him interested and excited about school, then I’ll feel that I’ve done my job as his father.  This is going to be exciting, hopefully for the both of us!
It’s great to be a dad!
Posted by J.P. at 2:23 PM No comments: