First there was Free Comic Book Day, then Steph and I went away for a week-long vacation visiting friends and attending a convention on the east coast without our son, and shortly after our return the school year ended with Paul finishing kindergarten. 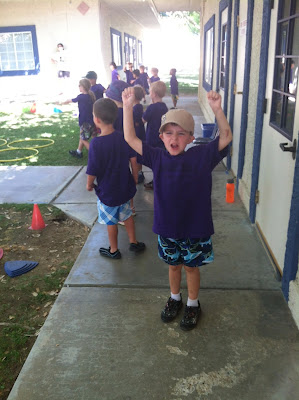 May the 4th (be with you)...Free Comic Book Day.  Yes, being the geek parents we are, we have a favorite local comic book store and took Paul to pick out a few issues and enjoy the costumes.  And boy did he!  He went in costume himself and was a hit with everyone there.  At his request we pulled out an old Halloween costume and transformed him into a little Bobba Fett.  When he arrived he was instantly greeted and flanked by by a few fellow Star Wars characters:  a Stormtrooper and a full-sized member of the Fett clan.  Our son told my wife, "This is the best day of my life!" 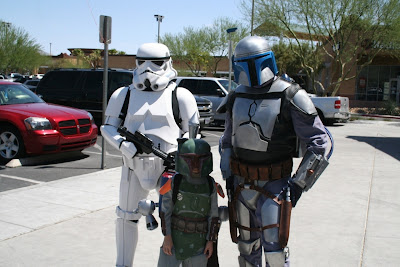 Toward the end of the month it was time for the convention.  I completely trust my in-laws with Paul, but I think I suffered from something akin to fatherly separation anxiety.  As I think I’ve said before, I miss my son when he’s in the next room asleep.  For my wife and I to be on the opposite side of the country for a week was a little stressful for me.  I’ve been on trips before, but Steph’s been home.  This time it was both of us going and while we had confidence he’d do well, listen to what he was told, and have a good time, there was really only one way to find out:  so off we went!  We had a blast at the convention and Paul had a blast with his grandparents, but this was one of the hardest things I’ve ever done as a father, and maybe in my life.  We spoke with him several times through the week and it was all fun and games.  The conversations weren’t long.  He was so busy having fun he’d give us a quick data-dump, and then off he’d go.  It warmed my heart to see how comfortable he was!  His behavior was great for his grandparents and at school, he did everything he was supposed to, and best of all he didn’t stress over our absence.  It was a great relief to know he took it all in stride.  (In fact, I think our dog stressed more than anyone, but she’s clingy and defensive.)  When we returned home, Paul was happy to see us, mostly because he could finally tell us about his adventures playing games, going on walks and especially playing in the pool. 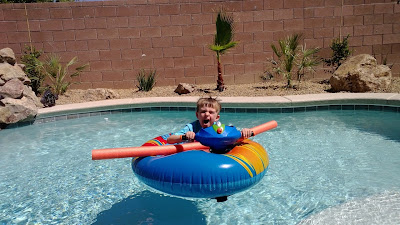 I’m sure fathers who have gone around this track before understand--as a father this was a big step for me.  I think the same was true in a different way for our son.  Each of us grew a little (or maybe a lot) due to the experience and I’ve had the privilege of watching my son take a small but major step in his growth.  I’m happy to see this level of independence in him.  As I pray with him every night: I’m thankful and proud that he’s my son, and that I’m his dad.

Then, school ended this past week and we’re now the proud parents of a graduated kindergartener / brand new first-grader.  Paul did well this year at school and I’m confident he’s very ready to enter grade school.  For him it means next year he gets a new teacher and new friends in class, but Steph and I have made a bit of a big deal about it with him, pointing out we’re proud of him for being a first grader now and for how well he did this year.  He’s already excited rather than nervous about it, and we’ll reinforce this with him toward the end of the summer.  In the meantime, summer break is here and we’re swinging out efforts toward encouraging him to enjoy the fun and the days away from the classroom.  I’m pretty sure we won’t have a problem with that and if this summer is like the last two, he’ll tell us he’s ready for school sometime during the last month of summer break.  I love this lifetime adventure and as always...