Somehow without being able to identify a specific place, date or time, I got hooked on running.  I’m not new to the sport at all, and while I’ve always run I can’t claim it’s been an integral part of my life from early on.  As with hiking (I posted about it a while back), there’s no doubt running is good for the body, but for me it’s also good for the soul.  Here’s what seems to have happened. 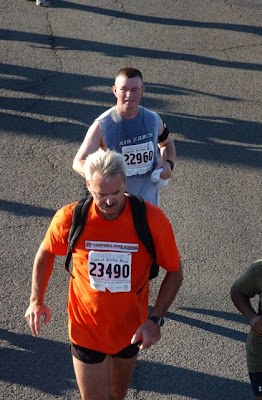 I ran track in high school one year.  I hated it but couldn’t explain why until later.  My dad lettered in track all four years he was in high school, but he never pushed me to participate in track.  He remained an avid runner for over half his life though, he and I would run 5 and 10K races together during my junior high and high school years.  Those were always fun and it never seemed like a competition with the other racers, or with dad.  It was just great dad ‘n’ lad time shared through something we both could do.  So I guess it made some sense that I said hello to the track team!  It seemed to be something I’d enjoy but within a year I moved on to something else.  The track team just wasn’t for me.

Then in college I joined the intramural cross country team.  I’m not sure why, but it seemed (again) to be something I’d like.  It was a better experience for me than high school track, and I learned a few things.  I liked running longer distances and experienced some of the same enjoyment I did when I ran with my dad.  I also learned I didn’t like high school track because the events I participated in were fast and short distances.  Cross country was definitely physically and mentally more fun.  We raced across changing terrain rather than around an oval and while speed still mattered, race strategy seemed to matter more when you needed to keep running longer.

There was something else I was discovering about myself too:  I get bored easily.  Running through changing scenery minimized the boredom of the oval track.  It was therapeutic in that it ensured I had dedicated time outdoors and outside of the sterile classroom.  I wasn’t fast, I never won a race, but I did well and I was a happier guy for it.

Life after college has been a 26+ year journey as an Air Force officer.  Fitness is an integral part of military life and running is a part of our fitness test--a short distance within a specified amount of time.  Not hard to do, and because of how I’m wired, not very fun.  But I’ve kept running, not to pass a fitness test, but for the same therapeutic benefits I mentioned before.  Trade sterile classrooms for sterile offices full of multiple computers and phones, and the appeal to get outside and move around increases.  Fresh air, strenuous physical work and the lack of office machines combine to do a lot to help reset and refocus mentally.  Time on the road or trail has become coveted time to listen to books, music, or sometimes nothing other than nature, and it’s always time to think without interruption.  No doubt the physical benefits are there even though I’m older and slower, but I tell people all the time that I value the mental/emotional benefits more.  It’s true.

I run more often now than ever before and while I’ve never been a long distance runner as some define “long distance,” how far I run has increased over time too.  So has my tolerance for running in most conditions: sun or rain, hot or cold, day or night.  And somewhere along the way the hobby has become something more akin to a passion.  Now I regularly run 5Ks and 10Ks, and next week I’ll run my first half marathon.

Everything else aside, I’m also doing my best to stay healthy for my son.  What’s even cooler about that: he watches me and has taken a real interest in my running.  He’s started asking me if he can run with me.  I used to push him along in a jogging stroller when he was an infant and toddler and I only stopped when he seemed to be bored with it.  Now he sees me running and wants to go along.  He knows when this Spring comes we’re going to start running together--no more stroller and no more waiting at home for dad to return.  He’s excited and that makes me happy!  We’ll start short and slow and he can decide if this is his cup of tea.  I don’t know if he’ll enjoy it or if he’ll stay interested over time, but I’m hopeful that as he grows we’ll have one more thing we can share, and it’s something that’ll contribute to his ability to develop and live a healthy lifestyle.

Life is funny:  I’m middle-aged and my body says I’m running like I probably should have been when I was younger.  But hey, I like it more now than I did before.  As long as my knees (and other middle-aged body parts) don’t rebel, I hope to run my first marathon sometime next year, and maybe a 50K in 2014:  50K for my 50th birthday.  In the years to come, maybe my son will run by my side, certainly casually and even in a few races.  Let’s see what happens. 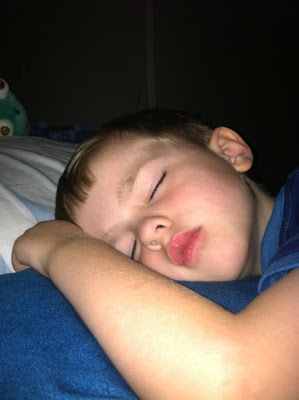 I purchased the Kindle version of the novella "Sundae: One Bear's Epic Crusade Through Childhood" by Matt Wallace a while ago, and it recently came to the top of my list.  I read it first sitting in an airport, and again almost immediately.  Within a week I read it to my five year old son.  Sundae is an amazing story.  While parts were a bit heavy for my son, he understood the story and definitely identified with several of the characters, especially the protective bear named Sundae.

Sundae is the story of a bear--a stuffed animal--whose purpose is to protect children from the dangers that exist within the unseen world of the imagination.  We follow Sundae from creation through his life, defending children and at times finding himself tucked away quietly in storage.

What I love most about this book is that it gives form to the shapeless and often nameless things that frighten children.  Things known and “seen” are often much less scary than things unseen and therefore less understood.  In the story we see the threats to the children with form and therefore we see Sundae’s battles as a child would see them.

My son loved the story, as did I, and he still talks about it.  He also has a small bear in his room he’s now renamed “Sundae”.  The bear is never far away and he sleeps well.

If you’re already familiar with Matt Wallace’s other works and didn’t realize he’s written a children’s story, don’t look past Sundae.  Even if you don’t have kids, read this.  I’m sure you’ll enjoy it, it’ll bring back some lost memories of childhood, and you just might know a child you can pass it to who would benefit from hearing this awesome story of adventure and courage.
Posted by J.P. at 2:09 PM No comments: