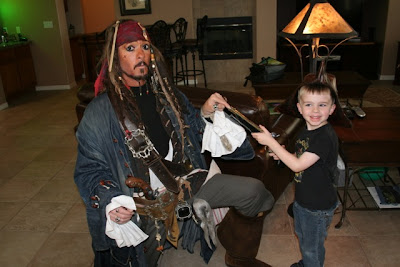 Paul, I’m proud you’re my son, every single day, and I truly miss you anytime we’re not in the same room together.  Sometimes I think your mom thinks I’m silly when I say, “I miss boy” when you’re just asleep in the other room.  There are so many amazing things your mom and I have enjoyed seeing you learn and do as we’ve watched you grow.  The world you’re growing up in is small and awesome, and you’re truly an international child.  Although you were born in the US, we moved to Germany when you were only one year old.  Before your fifth birthday you’ve already crossed the Atlantic Ocean 12 times!  You started kindergarden  in a German school when you were just three years old and was speaking German better than your mother and I ever could.  You’re thriving in school today in the US and are learning Spanish.
You have a wild and unfocused imagination--your world is airplanes, stars, spaceships, sailing ships, pirates and animals.  This isn’t just good, it’s a gift, and I hope I never discourage or limit your adventure through life.  There’s almost nothing you fear and I rarely have to push you to try anything.  You’re everybody’s friend, you’re always willing to share everything you have with others, and have the biggest heart I’ve ever seen in a child.  You have a very quick wit and an awesome sense of humor that already spans well beyond the usual potty humor of a young boy.  And you already have a strong sense of right and wrong and are willing to gently point out wrong when you see it.  You remind your mom and I when we forget to “say the Amen” at dinner or bedtime.  You’re an example to everyone, young and old, and there just aren’t words to say how proud I am of you.
The world you’re growing up in is amazing.  While some things are the same, many things are dramatically different.  There are aspects of the world you’re growing up in that would have been unrecognizable when I was your age.  Some day you’ll read this and hopefully laugh at how different some of these things are.  I turned five in 1969.  Some of these you’ll appreciate, some you’ll understand later and some you’ll wonder what the big deal was.  When I turned five:
- Only life itself was in high definition, not movies or TV shows.  In fact, most TVs were still black and white with small screens.  Color televisions were just starting to sell widely.
- There was no cable TV.
- There were no XBoxes or other video games.
- There were no iPads, iPods or iPhones.  There weren’t even any cell phones.  There was one phone and only one phone number for the whole house.
- There were no home computers.
But look at what was happening when I was five.  You’ll probably have to look some of these up some day:
- Sesame Street debuted on PBS.
- “Chitty Chitty Bang Bang” was a popular movie (following its December 1968 release).
- Neil Armstrong became the first man to set foot on Earth’s Moon.
- The Woodstock Music Festival was held in New York.
- The Dow Jones Industrial Average closed for the year at 800. (On your birthday this year it sat at 12,862.)
- The US Air Force closed Project Blue Book.  (Your great uncle worked on this project.)
- The first ATM was installed in the US.
- UNIX is developed at Bell Labs.
- The microprocessor in invented.
- ARPANET, the predecessor to the Internet was created.
- Bell-bottom jeans and tie-dye shirts became popular. (They’ll come back again, don’t worry.)
- Pontiac introduced the Firebird Trans Am “muscle car”.  I’ll show you one some day, along with other cool cars from those days.
Happy birthday, son.  The world is waiting for you and all the talent and gifts you bring to it.  I love you Paul!
It’s great to be a dad!
Posted by J.P. at 5:20 PM No comments: