A while back, after a visit with my son to Disney World, I wrote that Disney hadn’t lost it’s magic. Nothing has happened since to change my stance, but last weekend it was solidly reinforced.  We took Paul to see “Phineas and Ferb: the Best Live Tour Ever”.  He had no idea what he was in for.  We simply told him we had a surprise for him, and off we went. 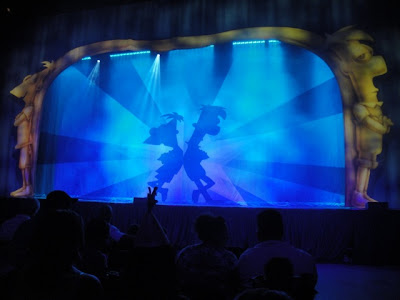 If you’re not familiar with Phineas and Ferb, take the time to check it out.  Two brothers, both smart in a gifted way, making the most of their 104 days of Summer vacation by applying their intelligence to any number of adventures.  The show doesn’t pander to kids, nor does it talk down to them.  In fact, the writers seem to strive to smartly entertain kids just above their level, and to do it in a way that it encourages them to strive and grow in what they know and do.  The TV show is witty and somehow talks to kids of all ages.  As a parent I appreciate the writers have also taken care to include things that make the program interesting and funny for adults.  The program encourages kids to think and imagine, be creative, play with others, and often times, to do all this outside.  Also, what most likely goes unnoticed but I’m sure influences young viewers, is the brothers are actually step-brothers.  You wouldn’t necessarily know this up front, but it sets a neat tone for the show.  Related, Phineas and Ferb’s circle of friends is diverse:  male and female, multi-national, multi-racial, and spans a wide variety of interests and personality types.  The show clearly emphasizes things in common and diminishes the things we (adults) sadly allow to get in the way of relationships.
Back to the live show.  We went to see actors playing cartoon characters.  I wasn’t sure how Disney (or anyone) would pull this off, but as long as it worked for my son then as far as I’m concerned, it works.  It worked.  The program began with the cartoon characters on screen, then had them transition to actors in costume by having each character go down a slide.  The cartoon character begins sliding and an actor in costume enters the stage on a real slide.  As an adult, I thought the characters were a bit odd looking, but there was no room for confusion about who each character was.  The program told a story, consistent with the Summer vacation theme of the TV show, and revolved around storytelling through dialog and music.  A week later, we’re all still singing the songs and quoting various parts of the production.
This past week at school my son told his classmates we took him to see “the real Phineas and Ferb.”  He wasn’t distracted by actors in costume and he’s still beaming about the show.  Disney, you’ve done it again.  The Magic Kingdom remains magical; very well done!  If the tour comes near you, take your kids and go.  They’ll enjoy it and so will you.
Details on the live tour are available at: http://disney.go.com/disneylive/phineas-and-ferb-on-tour/
It’s great to be a dad!
Posted by J.P. at 5:30 PM No comments: