The first week of February was a pretty big week for our household, and I’ll warn you now, there’s a little bit of parental love in here; I’m going to boast a little about my son.  This week he turned six, lost his second tooth the morning of his birthday, he tested through the end of the entire list of vocabulary words for the school year, and he won a Citizenship Award for fairness at school. 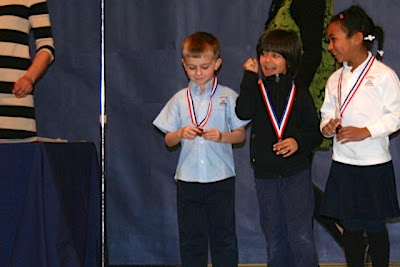 I’m not sure why having a six year old seems so different than having a five year old.  Perhaps it’s more psychological for me as a parent than any actual significance.  He’s still a child and I’ll always endeavor to ensure he gets to enjoy being a child at every age, but having a son who is now “grade school age” somehow makes things different.  It certainly feels different than when he turned five but it’s a little hard to quantify other than to say he’s a year older.  Some of the greatest changes while he was five have been his ability to spell and read.  He’s reading at the same level I was when I was in second grade, and unlike today, my classmates and I were reading in first grade.  (It saddens me that it seems the current standard in so many states is to have kids reading by third grade.  Nevada is one of those states.)

And tooth number two fell out on his birthday!  He was in the bathroom brushing his teeth and I heard him cheerfully exclaim, “My tooth fell out!  Dad!  My tooth fell out!”  We’ve told him that losing his baby teeth meant he was becoming a big boy, so he sees this as a good thing.  When I went in, he proudly showed me.  I asked him where his tooth was and he pointed at the drain.  I assured him that we didn’t need to see the tooth and that the hole where it had once been spoke volumes about how he was growing and healthy.

Then, two days after his birthday we attended the quarterly assembly at his school.  His school is Pre-K through 5th grade and is small enough that they assemble the entire student body during these quarterly gatherings.  In addition to the curriculum, each quarter the school focuses the students on a particular civics/citizenship attribute.  Last quarter was “fairness” and we were proud to learn that our son won recognition for being the best model of fairness within the kindergarden.  We weren’t necessarily surprised based on feedback we’d received from his teacher the year prior at the same school, and even from his kindergarden teacher in Germany two years ago.  What made this different was he was formally recognized in front of us and in front of the other students.

Then to wrap up an amazing week, even though the school year is just past half over we learned he successfully tested through the entire year’s list of vocabulary/sight words and he’s rifling through his spelling tests with equal skill!  All I can say is we seem to have done something right when we started him down the path of doing his homework in a disciplined way, rewarding him for getting it done, and ensuring we read to him (and he reads to us) nightly.

Related to last week, I think it’s important to point out he’s in a kindergarden with a formal curriculum; with real, nightly homework; and high standards of conduct for the kids.  But the school does a fantastic job of teaching the kids at their ages rather than pushing them too hard.  In other words, they aren’t pushing the kindergardeners to be first graders, etc.  They absolutely expect them to be good kindergardeners in order to be ready for first grade.  The kids know what’s expected, are solidly encouraged when they show progress, helped when they struggle, and I think this keeps school fun for them--as fun as school can be anyway.  We strive to have the same environment at home and do our best to always be mindful to let our (now) six year old actually be a six year old, to enjoy the things little boys at his age enjoy, and ensure while we’re laying the critical foundation of education, he also gets plenty of time to play and goof off.  It isn’t always an easy balance to keep, but so far so good.  I’m so proud of my son!