There are a number of movies I intend to watch with my son as he grows older, to reinforce a variety of life’s lessons.  Some are general while others specifically focus on being a man.  I recently saw National Geographic’s documentary film RESTREPO.  It’s now on my list of films to watch with my son, and it’s a film I highly recommend to you, especially if you’re not in the military. 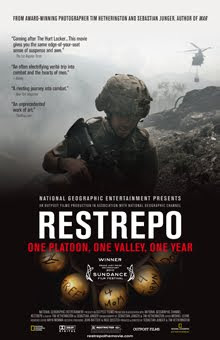 The film follows a platoon from U.S. Army’s 173rd Airborne Brigade while deployed to an outpost in Afghanistan’s Korengal Valley, Kunar Province, Afghanistan from 2007 to 2008.  The name of the outpost and title of the film come from the platoon’s fallen medic PFC Juan Restrepo. 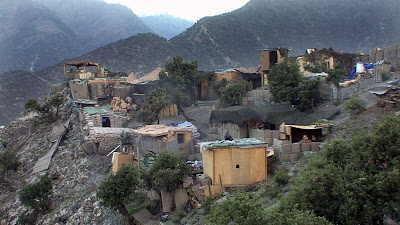 (Outpost (“OP”) Restrepo. Korengal Valley, Kunar Province, Afghanistan. 2008. A film still from the documentary RESTREPO by Tim Hetherington and Sebastian Junger. Image © Outpost Films)
The film is not political, nor does it take a stand on the U.S. military or military service in general.  The purpose appears to be to give a raw human view of this kind of combat deployment, including the associated highs and lows.  The experience is visually stunning, intimate and very human as you see a one-year combat deployment digested into 90 minutes.  It’s very well done.
From the film’s website, its directors Tim Hetherington and Sebastian Junger state:  “The war in Afghanistan has become highly politicized, but soldiers rarely take part in that discussion. Our intention was to capture the experience of combat, boredom and fear through the eyes of the soldiers themselves. Their lives were our lives: we did not sit down with their families, we did not interview Afghans, we did not explore geopolitical debates. Soldiers are living and fighting and dying at remote outposts in Afghanistan in conditions that few Americans back home can imagine. Their experiences are important to understand, regardless of one's political beliefs. Beliefs are a way to avoid looking at reality. This is reality.” 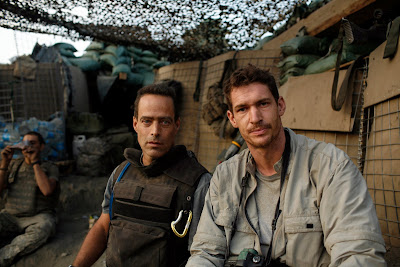 (RESTREPO filmmakers Sebastian Junger (l.) and Tim Hetherington (r.) at Outpost Restrepo. Korengal Valley, Afghanistan, Kunar Province. 2007. Photograph © Tim Hetherington)
What about your kids?  You know your kids better than anyone, but my recommendation is not to take children under 17 to see this.  While the movie isn’t necessarily gory, it is a war movie.  It’s not a depiction; it’s a documentary, and it’s violent.  The violence, however, occurs in an appropriate context (it’s not violence captured on film simply for the purpose of sensational violence) and the film is very respectful of the soldiers and families involved.  What will make the movie difficult for kids, especially young ones, is viewing the movie without an appropriate understanding of the broader real-world context of the war in Afghanistan, or the decisions that led us to the war--again, not really a part of what the movie attempts to address.
For older or more mature kids, it may be a great teaching tool to help them know and understand any number of broader things:  courage, duty, service to country and friends, loyalty, bravery, decision-making, the practical impact of political decisions, as well as other attributes that we parents hope to see instilled in our kids as they mature into adults.  Overall, I recommend parents see the movie first, then decide if it’s the kind of film your kids should see.
For more information and to see the trailer, visit the film’s website (http://restrepothemovie.com) and National Geographic’s “The Making of Restrepo” (http://movies.nationalgeographic.com/movies/restrepo/junger-hetherington)
I highly recommend you see this movie no matter what your political views, your views of the military, or the war in Afghanistan.  It’s an amazing snapshot of what one facet of modern ground warfare looks like: dramatically different than that of previous wars up to and including the war to liberate Iraq.  More importantly, it’s also an amazing chronicle of the bonds that form between men, in this case men who became friends as they trained together and later fought side by side.
It’s great to be a dad!
Posted by J.P. at 4:01 PM