One of the things I love most about being a dad so far is watching my son’s imagination develop.  I try to encourage it.  The results at times have sprung out of the blue when some crazy, cool new demonstration of imagination just appears.  The other night Steph and I were eating pizza for dinner and decided to sit in the living room instead of at the table to catch a show we rarely get to see.  Suddenly Paul starts humming music from the Star Wars movie “Return of the Jedi.”  The tune was from the scene when the Imperial Dreadnought “Executor,” crippled by a rebel Y-Wing, crashes into the unfinished second Death Star.  We looked up and his slice of pizza had become the Dreadnought and his plate was the Death Star.  But this wasn’t our imagination interpreting what he was doing; we asked him and he told us, “it’s crashing into the Death Star!”  Thankfully the camera was handy. 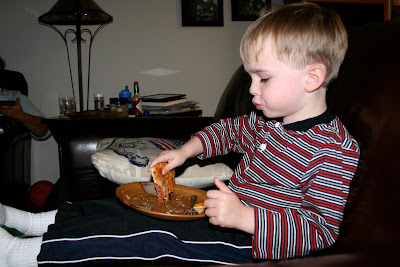 Steph and I clearly started and continue to encourage his fondness of Star Wars (and all things SciFi), but this was the first time we saw him apply is imagination in this way.
Traditional Blocks
A year or so ago we also bought Paul a basic set of building blocks.  You know the ones: a simple variety of colors and basic shapes: cubes, rectangles, wedges, cylinders, and planks.  Usually small buildings or garages emerge so he can drive his toy cars and trucks around them.  Then one day he built a tower--one that we didn’t have to pretend looked like one.  Paul even took a couple toy men and put them on and around it.  They were mediaeval knights standing guard to defend the tower from attack.  It was a good, strong tower, built on the stone cliffs of...the coffee table.  Of course, no tower is complete without a dragon, and as you can see Paul was happy to play the role. 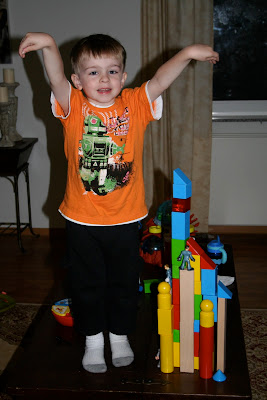 The tower withstood relentless attacks for what must have been an appropriately long time in Paul’s mind, and then its walls fell.  I suspect the cool thing for any boy who gets to be the dragon is that he gets to destroy the tower when his imagination drives him on to another adventure.  Certainly that’s better and much more fun than the alternative--Steph or I getting tired of having it in the middle of everything and putting it away for him.
LEGOs
Paul has a growing collection of LEGOs; a childhood staple for kids since prehistoric times.  His consist of an assortment of basic building blocks, and some of the Star Wars kits (of course).  While the Star Wars kits don’t usually lend themselves to a lot of creative building at this point, he’s always playing out scenes from the movies as well as new scenes from his own imagination.  Every now and then, the custom parts do lend themselves to something entirely not Star Wars related.  The basic building blocks, however, offer his young mind a clean slate.  Like kids everywhere, if he can imagine it, he can try to build it.  The first time he did this with any real accuracy and success was when he built himself a tiny camera, complete with viewfinder and a button to push to take the picture. 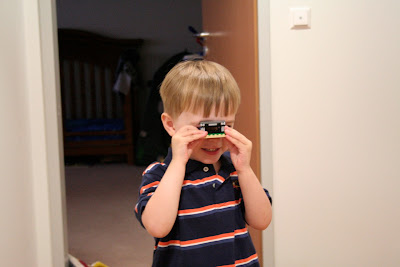 Paul is also a fan of Dr. Who.  If you’re familiar with the show, you know there are episodes we don’t let him watch, but he’s seen many of them and regularly asks to see more.  What sticks with him from these shows are the Doctor’s Tardis, and the Daleks, and the LEGOs help fuel the imagination here just like a dinner plate and pizza did for Star Wars.  From LEGOs, Paul has built a pretty amazing Tardis or two!
Everything in the house is potentially useful and we try to encourage him to see things differently than what their obvious purpose is.  As I was drafting this, Paul came in and told me, “I did it!  All the robots have matching heads!”  I followed him into the hallway to find out what he was talking about.  Who could have known that an empty case of beer bottles set by the door to go back to the getränkemarkt were actually a bunch of robots.  He had taken the time to swing all the stoppers back up to the top of the bottles, turn them upside down and set them on top of the bottles.  They’re robots, and why not?

What’s next?
Of course, we’ll keep expanding the LEGO collection by increasing the size of the basic pieces.  This Christmas we’re going to introduce him to another imagination fueling toy:  a basic set of Lincoln Logs.  Who knows where these will take him, and take us through his active imagination.  I can’t wait for the ride!
It’s great to be a dad!
Posted by J.P. at 4:41 AM