Paul has a digital clock in his room.  He can’t really tell time but knows his numbers, and knows he’s not supposed to wake us up before the first number is seven; any smaller first number and he can play quietly in his room; any number bigger than seven and it’s okay to come out. 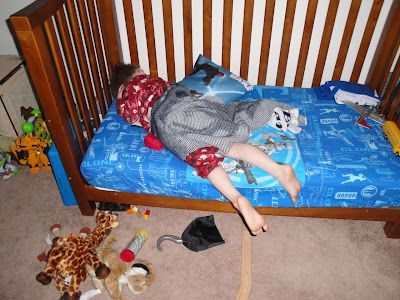 During the week his past week, I was already gone for work and sometime around 6:40 a.m. Paul calls out to Steph, “it’s wake-up time!”  She glanced at the clock in our room, told him it wasn’t and to go back to sleep or play quietly.  A few rounds of “yes it is, no it isn’t” ensued before Steph finally told him, “if I come in there and the first number isn’t seven, I’m going to be angry with you.”  Paul all but challenged her to come and see.  She got up and headed in.
Paul is four and I suppose some of you are already thinking Steph will walk in and discover he had somehow changed the clock.  While it’s possible, this isn’t what was going on.  She walked into his room, looked at the clock and saw it was displaying the right time, still a bit before seven.  She pointed at the clock and told Paul, “son, look at your clock.  It’s not seven yet.”  Paul’s response?  With absolute sincerity, he pointed at the same clock and said, “Yes it is Mom, but look.  The six is pretending to be a seven.”
This same week on two other occasions, both after the “six pretending to be a seven” incident, he was up early and told us it was time to get up because the sun was already awake.  Over the years I’ve become a morning person, so this doesn’t bother me; I’m usually up and going before Paul, regardless of the day of the week.  (As I write this, I wonder how and when I hit the point in my life when “sleeping in” means sleeping until six in the morning...)  Anyway, I’m usually up.  But Steph’s definitely not a morning person, so during the week anything earlier than seven is getting up early for her.  The days I don’t work are the days she can truly sleep in and I get to start the day with some quality dad-and-lad time.
The day will come soon when Paul will change the clock and think he’s done something sneaky.  I also know we’re not too far from allowing him to come out of his room even before we’re up, as long as he plays quietly.  Until then, I’m proud to see his young imagination racing along.  The six is pretending to be a seven now, and being creative enough one day to change the clock--that’s my amazing, awesome son!  As I said, and as I tell him every night I have the privilege of putting him to bed, I’m proud he’s my son and I’m proud to be his father.
It’s great to be a dad!
Posted by J.P. at 7:17 AM