My son is four.  I’m 47.  That’s quite a spread.  With all the “wisdom” 47 years brings to a man, my four year old son humbled me the other day and it hit me like a board between the eyes. 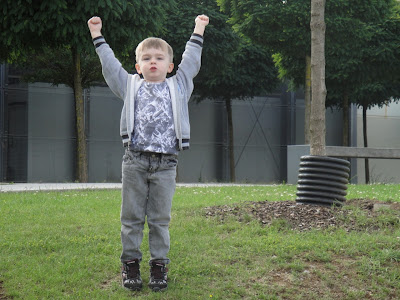 Paul is awesome.  He’s been as good as we could have ever hoped for.  He listens to Steph and I just about all the time.  But like any four year old, he’s aware of his own wants and desires, sees when they come into conflict with what we want him to do, and at times tries to protest or appeal to us to let him do something other than what we want.  When this happens, we rarely hear a simple “no” or “I don’t want to.”  Instead, the young man constructs an argument to explain to us why he ought to do what he wants.  Although the content of the argument is simple, at times they’re pretty elaborate.
Guess what...I know what he’s going to say.  Shocked, right?  Okay, not really.  Like all parents, I get impatient after telling him multiple times what my position is on something (“No son, you can’t have a piece of candy until you eat your lunch.”), only to hear him try to argue me into changing my mind.  I end up firmly but gently reinforcing my position and not letting him continue with his well-intentioned point.
The other day, I interrupted him and affirmed my position on not eating candy for lunch.  He stopped and with a frustrated and slightly sad face told me, “Dad, let me tell you the whole thing first.”  Oops.  I’m a heel.  There was something going on in our back-and-forth just as important as the surface discussion about why he wasn’t going to eat junk food for lunch.  My son is learning how to form and argument in his mind, then express his position.  He argues with all the horsepower of a four year old and can’t win unless I relent.  The problem was I failed to remember he’s only four and I’m not arguing with a peer.  I need to let him say his piece, form and then make his argument, then lovingly stand my ground after he’s done.
In that instant and in the hurry of being a busy parent, my son had to remind me of something I believe is key to good parenting:  I’m responsible for preparing him to be a successful adult.  This includes encouraging the functioning of his young mind, even if it takes longer to tell him “no” than I want to take.  Ditto for other similar things!  This reminds me of something a pastor of mine said that applies to so much of life:  the old sacrifice for the young.  My son is amazing, and he’s four.  I need to encourage him on his level in a way that encourages him to develop so he’s best prepared to be five, 10, 15, and one day, an adult.
It’s great to be a dad!
Posted by J.P. at 5:07 PM