Two years ago I never thought I'd ever be able to run a marathon, but after putting several half marathons behind me and four months of dedicated training, I ran the Rock ‘n’ Roll Las Vegas Marathon!

This is the same event that I ran my first half marathon during, just a year ago.  I completed the training without any issues and on the evening of November 17th I was ready to run, nervous and excited, and joined about 30,000 of my running buddies in the Starting Village as we put ourselves into a proper mental state with each other and with the help of the All American Rejects (who put on a fantastic concert for us!).  Then it was time to get into our corals, hear a wedding performed at the starting line (because it's what we do in Vegas) and the National Anthem.  Finally the gun sounded and we were off.  I set out to run the race in four hours and twenty minutes but ended up finishing in five hours and twenty six minutes.  I'll explain why. 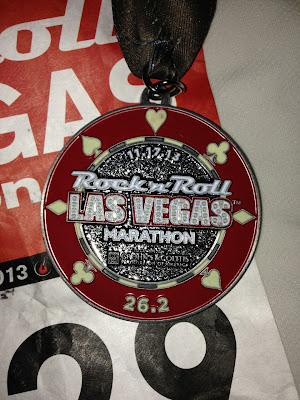 I learned a few things through my training and the race.  First and foremost, a full marathon isn’t twice as hard as a half marathon.  It’s more than twice as hard.  I suspected this was the case when I realized I had passed through the 13.1 mile mark with what seemed like ease, but somewhere around mile 20 I was more than twice as sore as when I had finished the half marathons I'd run before, to include covering 13.1 to 20 miles seven of the last eight weekends during my training.  In the end, I think the marathon is the hardest thing I’ve ever put my body through.

Cramps.  Thankfully I’ve never had abdominal cramps or stomach issues while running.   I’ve had to manage leg and foot cramps after long runs at times but I’ve also never had to deal with them while running.  Until this race.  Between miles 17-18 my right calf cramped pretty hard.  It happened quickly and rather than pretend I could fight it, I slowed to a walk and let it resolve.  It seemed to take forever, but it worked.  I went back to running after it let go and continued on until sometime between mile 22 and 23 when it cramped again.  I slowed to a walk again.  It took longer to stop cramping but I finally picked up a slow running pace once it released.  At that point the front of my thighs were on the verge of cramping (probably the result of compensating for the misbehaving calf) but never did so, so I pressed on and crossed the finish line tired and happy, with a small group of other tired and happy runners.  The time I spent walking accounted for a good bit of the extra hour it took me to finish the race.

Hydration.  I don’t think the cramps were the result of dehydration.  I was well-hydrated, sweated throughout the race and even had to stop several times and take advantage of the portable bathrooms staged along the route.  I don’t believe I was over-hydrated either.  My watch and RoadID fit well and never got tight.  My hands and feet never swelled.

Nutrition.  I’d been training at longer distances with Gu gels and cut up nutrition bars, and if I ate during a training run, I’d carry water (rather than a sports drink).  I’d eat along the way every 45 minutes to an hour with good success.  On mid-length runs, I wouldn’t always take solid food or gels and would run with Nuun in my water bottle instead.  My longest runs made me sore but I never cramped.  With the leg cramps during this race, I have more experimenting to do with long distance nutrition.  I suspect the cramps were the result of not managing my electrolytes well and so an imbalance formed during the run.  (BTW, I’m a pretty salty sweater.)  Based on recommendations from others, I want to try Tailwind and will probably give it a go the next time I train for a long race.

Weather & Clothing.  The weather was perfect.  The temperature at the start was about 65F with low humidity typical of southern Nevada, and just a slight breeze.  Being a night race, the sun was setting as the race began and the temperature gently dropped throughout the run.  I wore shorts, a thin long-sleeved tech tee, with another short-sleeved tech tee on top.  Injinji socks and my Saucony Kinvara 3s on my feet, and no hat or gloves.  As is the norm, I had no foot problems at all (including no blisters).  I never felt too hot, and only got chilly when I was walking off the leg cramps.  BTW, the Kinvaras are now retired with that race bringing me just short of 400 miles on those shoes.  They were fantastic road shoes and I’ll probably replace them with a pair of Kinvara 4s. 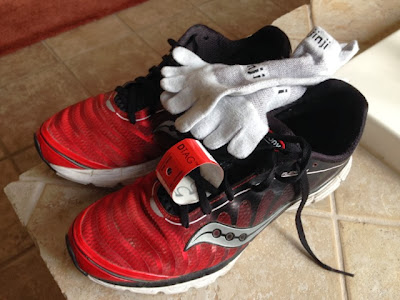 My Family.  Training for this race took four months.  I couldn’t have done it without the support of my wife and son, who patiently dealt with my (very) early runs during the hot months, then my evening/night runs during my last month of training.  That last month was especially disruptive since runs were longer and often trampled over dinnertime and even my son’s bedtime on occasion.  And then there was the adjusted social schedule with friends and other family members.  I owe my wife and son HUGE thanks for letting me train for, and then run this race.  So thank you Stephanie and Paul!  I love you and I can’t repay you for your generosity and patience.

Now that this race is done, I plan on trying to work more variety into my training:  more general body strength, core strength, and I want to get back to working on the stairs and rowing again.  I’m also going to try to get back to more trail running.

So, will I do it again?  YES!  I definitely want to run another marathon.  The half marathon in Las Vegas is awesome because you spend all of the time on The Strip and parts of the Art District, but the added route for the full marathon is frankly boring, covering two long and straight roads.  I’ll probably continue to run the half marathon here but will look for my next full marathon in a different location: perhaps one of the southern California races in LA or San Diego.

(Disclosure:  I was not asked to comment on or endorse, nor was I compensated for mentioning any of the brand products in this post.)
Posted by J.P. at 6:31 PM