One of the challenges of parenting is finding ways to safely let your child fail at something so that they learn, grow and improve from it.  When you and your child are surrounded by like-minded friends, those inevitable moments of failure can become wonderful experiences. 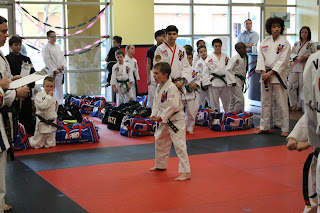 In April, all three of us tested for our next belts at our Victory Martial Arts school.  We each tested on different nights:  three nights and three tests, followed by a fourth night where we’d all stand together and tie on our new belts as a family.  Steph tested on Monday and passed, I tested Tuesday and passed, and our son tested on Wednesday.  He didn’t pass.

He wasn’t alone, as several others failed as well.  Not to diminish what we were doing, testing this time was difficult for all of us.  Steph was working hard to gain and maintain the necessary skills while guarding against re-injuring her knee.  Training to pass her test while in the middle of physical therapy was a challenge.  Her perseverance showed though and she did fine in spite of some real difficulty and pain.  For Paul and I, this was our first training cycle and test as advanced students.  The standard required to be allowed to test is higher, and what’s required to pass the test is also more difficult.

At the end of the evening, our school’s director was fantastic with the kids who failed.  He took time to explain the role that failure plays in life.  It was a great teaching moment.  The kids who didn’t know how to learn from a failure had a glimpse within a very safe environment, how they could apply this experience and continue to grow toward success.  It was very special to see how the instructors and the parents came together to celebrate those who passed, and solidly encourage and support those who didn’t at the same time.  Let me be frank:  this is not a program that finds a reason for everyone to pass.  Everyone doesn’t get a new belt.  If you don’t meet the standard, you have the opportunity to train hard and try again next time.

What made this experience special was that while the kids who didn’t pass were still disappointed, they learned several important things:

First, they can and should be responsible for working to improve themselves for the next time, so they can try again.  Good instruction is provided, but as we know, that’s not all it takes.  Many of these kids knew as they were testing that they didn’t meet the standard to pass.  Some also felt that something outside of their control caused them to fail.  As adults and parents I trust we all know that this is how it is in life.  Sometimes you don’t prepare well enough.  Other times things happen that you don’t or can’t anticipate or control, and these things frustrate your best intentions and desires.  Even so, you can be the victim and blame everyone else, or you can work to overcome the obstacle.  Paul and so many others that night set out immediately to do better and not succumb to the temptation to blame someone or something else.  They strive to improve and perfect the things they can so that when the challenge comes, they’re best prepared to succeed…to win.

Second, there are journeys in life that are just as important as the intended goal at the end.  Running is one of those journeys.  The practice of martial arts is another.  Getting your next belt is always the goal.  Getting a black belt is certainly a goal that many view at THE goal, but working toward the black belt is where most of the learning happens.  Once you earn your black, there are additional degrees of progression.  The journey can end, but it can also continue beyond just earning a belt.  Even if you physically hit a point where the next belt is out of reach, the journey doesn’t have to stop.  The fit lifestyle and the challenges to maintain your health to the best of your ability can certainly continue.  Giving the benefit of your experiences, your wisdom, can (and should) continue as you help those who are at an earlier point in their journeys, or are struggling through something for the first time that you’ve dealt with many times before.  I believe the journey is really the adventure and the goal.  In the case of martial arts, the belts represent signposts or reminders from special points along the way.

Third, there’s still joy to be found in celebrating the successes of your friends and family.  Paul was clearly disappointed but he perked up quickly and continued to cheer for his friends.  At the end, he found as many friends as he could who passed and told them “good job”, gave high-fives and hugs.  As things calmed down though, some of his sadness returned and Steph and I had the pleasure to see him do something that many adults probably wouldn’t have.  He stepped outside with one of his best friends who also failed the test, sat on the curb, and these two amazing boys shed tears together as they comforted and encouraged one another.

What made this most special  for Steph and I was the Belting Ceremony.  Paul sat with us on the floor and participated as Steph and I tied our new belts on, even though he wasn’t receiving one himself.  He stood there with us, and each of us held an end and pulled together.  He told us several times he would never want to miss being there to celebrate with us and help us tie our belts on.  What a wonderful perspective coming from such a young man.

In the end, our son is learning how to deal with adversity and failure in a very safe and controlled environment.  With good instruction, support and encouragement from his family and friends, mixed with his own developing perseverance, he’ll continue down this path.  He’ll be a better martial artist for it.  I think as he applies what he’s learning to the rest of this life, he’ll be a better man.  By the way, watching him do things I’ve never did at his age makes me a better man too.  I’m so proud of my son! 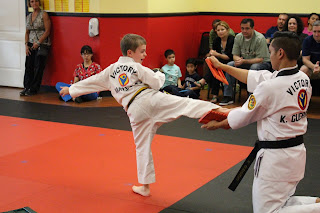 That was in April.  Now it’s October.  We’ve tested twice since then, and next week is the next testing cycle.  So much has happened.  I’ll tell you the rest of the story in my next post.