Hero: a person, typically a man, who is admired or idealized for courage, outstanding achievements, or noble qualities. 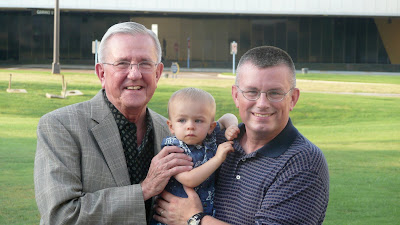 It seems there’s always a lot of chatter about heroes:  what constitutes a hero, who the heroes are (or should be) historically, whether or not actors or athletes are appropriate heroes, etc.  Rather than enter that debate, I want to call attention to three men who are heroes in my life:  my father and both of my grandfathers.  Not that there aren’t other men who I believe fall into this category, but these three men were in my life from the beginning.  Over the next several months I plan on highlighting each of them.  They may not reach the threshold of “hero” for anyone else, but for me they each modeled the character that fits the definition.  Although they’re all men who grew up in a manner typical of their generations, they modeled greatness in their lives, certainly to me.
Here’s a brief biography for each of these great men in my life:
Paul A. Harvey:  My father, born in Salt Lake City, Utah in 1937.  He lived in Salt Lake City until his parents moved to Dallas, Texas.  As best he can remember, his first regular job was at the age of nine, throwing a paper route in Dallas consisting of 63 customers.  His parents also expected him to work at home in the yard every Saturday and Sunday unless he went to church.  As such, yard work on Sundays came to an end and he attributes this practical application of his parents’ work ethic to his decision to embrace the Christian faith at an early age at Saint Matthews Cathedral, (Episcopal).  He completed college and joined the U.S. Air Force for what was to be six years of service to his country, and to learn to fly.  His intent was to move to civilian life and fly for the airlines after a short term of service.  Thirty-two years later he retired as a major general, settling down in Mississippi after a full and successful military career.  He worked for the state government for a time, and continues to work full-time today in private industry.
Paul J. Harvey:  My paternal grandfather, born in Salt Lake City, Utah in 1910, he was a direct descendant of the Mormon settlers who founded the city in 1847.  He married my Grandmother (also a descendant of the original settlers) when they were both 20 years old.  After two years of study at the University of Utah, he was hired by the American Chicle Company.  In 1941 he moved his family to Dallas, Texas and was promoted to a District Management position.  Shortly thereafter, he entered the U.S. Navy's Officer Candidate School at SMU in Dallas, Texas at the outbreak of World War 2, however, he came home in 1942 as the result of the onset of his mother’s blindness.  He eventually moved to Cleveland, Ohio where he spent the rest of his life.  In spite of not finishing college, he remained in management positions and  eventually retired in 1974 after 39 years of service with Warner-Lambert (who purchased American Chicle Company).  He never slowed down and after 85 years, he passed away in 1995.
Richard F. Bromiley:  My maternal grandfather, born Richard F. Hill in Philadelphia, Pennsylvania in 1916.  When his father (a medical doctor in the US Navy) passed away, his mother married a man named Walter Bromiley, who then adopted my grandfather and his younger sister.  With a desire to attend college and fly airplanes, he kept his grades up and applied to the U.S. Military Academy at West Point.  He was accepted, graduated in 1938 and served a full career in the US military, including combat service through World War 2.  Days after graduation, he married my Grandmother, also from Philadelphia.  He retired from the United States Air Force as a Brigadier General in March 1967 and accepted a position with United Airlines as Vice President Maintenance.  In 2004 he passed away after 88 full years of life.
Hopefully I’ll do a good job honoring these men as I share the details of their lives in the months to come, and especially how each of them influenced me as a man.  All three have been and continue to be role models for me, and have shaped the kind of man I am.  If there’s any manly good in me, it’s their influence shining through; where I fall short, it’s in spite of them and their great influence.  As my son grows he’ll continue to enjoy my dad’s influence directly, and I hope he never stops seeing the indirect influences of his great grandfathers.  One of the very few measures of my own success as a father is seeing my son take everything he can from these other men and I, and raise the standard by being an even better man than the four of us.
It’s great to be a dad!
Posted by J.P. at 9:45 PM