The Art of Parenting

It’s abundantly clear to me that raising kids is an art: not doodling, but full-on Rembrandt stuff.  I think I knew this even when I was a kid, but I didn’t really have enough time on earth to have a reasonable understanding of the real context or weight of what it meant.  As parents Steph and I constantly work to stay somewhere between the extremes of being overprotective of Paul and surrendering control over what goes into his young mind. 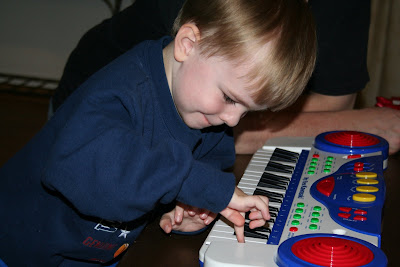 My view of Paul’s education is that Steph and I are primarily responsible.  By education, I mean the entirety of his learning, not just the formal education that takes place in a school or church.  Schools and the church will eventually do the bulk of the formalized heavy lifting, but as his parents we will always have prime responsibility for everything that forms our young son into a young man and eventually into a mature adult--inside and outside the classroom.
Our goal in raising Paul is to prepare him to be a healthy, contributing adult member of society.  I’ve watched other parents raise their kids my entire life (starting with watching my own parents raise my sisters and I) and found that as with almost everything there’s a significantly wide road where the issues aren’t really about right or wrong.  They’re in an acceptable lane defined by right and wrong where the differences are really about what’s best or appropriate for a particular child at a given time.  But the extremes are lurking just off the middle of the road and we’ve seen any number of our friends and acquaintances drive with high-speed zeal right off the road, across the shoulder and into the ditch on one side or the other.
The ditch on the right is overprotection.  These parents are control freaks for any number of reasons: trying to live (or relive) their lives through their kids, they’re afraid of the world, or they can’t stand to let their kids be kids and instead expect a child or young adult act with the same wisdom that the parents have.  These are the ones I believe fail in the previously mentioned primary goal or purpose of parenting. They have not raised a child to be strong and educated, and fully prepared to confidently enter society knowing who he or she is.  Instead, they’ve worked to prevent it as if they could keep their little one little.
Then, the ditch on the left is letting somebody, anybody else worry about it.  You’ve heard these people at the grocery store or in line at Starbucks defensively asserting they don’t have time, or they’re not the trained professional: the school teacher, the pastor, the daycare worker.  And they’re right, but all those other folks aren’t the parents either.  I think the folks who fling themselves into this ditch are lazy or chronically over-tired parents, the ones who over time seem to constantly have a list of reasons for letting everyone else raise their kids--the schools, the church, daycare, the computer or TV, the neighbor.
Whether they intended it or not, with our generation when someone goes in the ditch, it’s mostly been overprotection and a failure to prepare their kids to live in the world.  Instead they try to protect or shelter their kids from ever entering it, as if it were possible.  From what we’ve seen, the result is usually an unprepared and socially impaired or naive young adult, and very frustrated parents. This is unfair to the child and to society, and when that young adult actually does make full contact with the real world, the young adult either shuts down or rebels, and the rest of us get to enjoy their dysfunction or sophomoric anger as they discover they have a lot of catching up to do.  Sadly and most often, these families are well-intentioned members of the church.
Steph and I feel fortunate to have grown up with both parents around.  We both enjoyed the benefits of traditional families in that our dads worked full time and our moms stayed home.  And trust me, they were all busy beyond my ability to put in words.
Having Paul later in our adult lives certainly has its benefits.  In this case, we’ve hopefully learned a lot from years of watching good and bad parents.  The downside is that we know enough that raising our own son may be scarier than it ought to be.  Will we mess up?  For sure.  Hopefully we’ll be wise enough to generally get it right though, thanks to the parents we’ve had the privilege to watch perform the art of parenting.  And I hope we’re always transparent enough that we’re also good examples for those who come behind us.  God help me--this parenting is hard work, but it sure is fun!
It’s great to be a dad!
Posted by J.P. at 3:00 PM