Last weekend I took Paul on a trail hike around a small peak in the Calico Basin part of Red Rock Canyon.  This would be the longest and most difficult hike he’s ever done.  With water and snacks in hand, we joined with another parent and one of his friends from school and off we went. 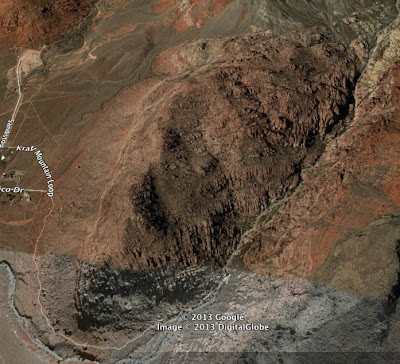 In the Google Earth image, we parked on the left side near the intersection of Sandstone and Kraft Mountain Loop, then started counterclockwise around the peak.  You can see the trail circle the mountain, then cut up and over, circling around the top of the image and back toward where we parked.  At the start, most of the trail was relatively flat, with elevation changes happening gradually.  The scenery was awesome and we made our way about half way around the peak on a trail that varied between powdery sand and gravel. 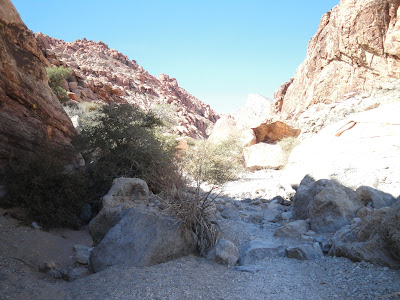 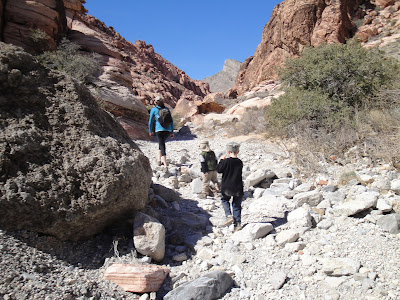 At about the halfway point, the ground got a bit rockier and we came to the first of several obstacles, primarily large boulders, we had to climb up and over.  The challenge for the two parents was to coordinate our efforts to work the boys up and over the obstacles.  Usually one of us would go up first, then both the boys, then the other parent would come up last.  The boys were also challenged by this, not just because of the climbing, but because once on top of an obstacle, it took all the attention a five and six year old team of boys could muster to pay attention and be still.  They did great!

With the rock scrambles over obstacles behind us, we rounded the peak to turn back toward the car and had the opportunity to hike a trail up and over the peak, taking us very close to the highest part.  We rested at the top for a bit, enjoyed a little more water and took in the view, then made our way back down.

We spent the rest of the day resting and visiting my wife’s parents.  He’d given everything he had to a physically demanding day doing something he’d never done before.  He rode an emotional high too, probably fueled by regular statements by me of how proud I was of him for doing something that difficult for a little man.  Then bedtime finally came, his head hit the pillow, and he slept hard and peacefully.  When my bedtime came, I did too.  Being a dad, for me the day brought its own stress and excitement as I watched my son do things he’d never done before, some of these things with a bit of very managed risk, but risk nonetheless.  I fell asleep content and very proud of Paul.

Another adventure is behind us now: one more special experience I’ve had the privilege of sharing with my son.