As we were flying to Baltimore this year to attend the Baltimore Science Fiction Society’s annual convention (BaltiCon), it occurred to my wife and I that Paul has attended BaltiCon with us for the last three years--three of the four years he’s been alive.  As a geek, this makes me happy: this particular convention is perfect for fueling his imagination.  He walks, talks and even naps with science fiction on the brain. 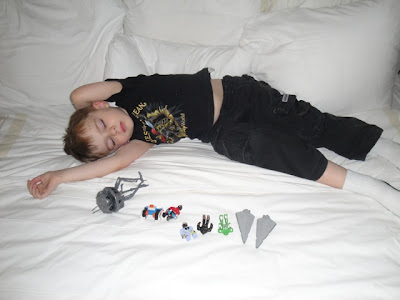 Even though he’s only four, Paul remembers the signs and sounds of the convention from past years.  The detail he remembers are stunning: about the rooms, the layout of the hotel, the people he’s met (and only sees once a year), and even particulars about certain vendors.  Those of you who attend science fiction or fantasy conventions know kids of all ages show up.  The geek parents (like me), are predictable, often sporting blue jeans and t-shirts with a host of geeky images and phrases that resonate with fellow attendees.  During a few special occasions like the Steampunk Ball, or particular book readings or themed panels, the costumes come out. There are a few attendees though who costume through the whole event, and to say they’re in costume is to give more credit than is due.  Some of these folks look like they’ve simply added color and accessories to their college togas, but they’re harmless and Paul is exposed to sights and sounds he doesn’t usually see and hear otherwise.  Don’t get me wrong, he gets a full dose of geek every day at home, but not like this.  Being surrounded by a few thousand people for a long weekend, all with a passion for science fiction and fantasy fuels his young imagination and lets him talk about and act upon things that excite his mind.
I love attending a convention this size with my son.  At BaltiCon, small equals intimate.  The invited guests (authors, folks from film, radio and especially podcasters) are very accessible, approachable, and for the most part humble.  Some are very well known print and podcast personalities.  This year the guest of honor was Ben Bova and other attending dignitaries included a significant host of A-list podcast and print authors.  Fans  regularly mix it up with the featured personalities on a regular basis.  Panels and readings are intimate and it’s common to find yourself sitting and chatting with guest talent over a meal or at the bar.  For my son, this is special.  Since we’re not lost in the mob, he gets focused attention from the both of us as well as from other attendees--including the big guns!  The experience isn’t overwhelming for him, the convention is contained in a single hotel, and there’s ample time for us to “explore” the science fiction sites with him.  I hope his fondness for science fiction and fantasy grows.  It was certainly a part of my own formative years, only I never had the chance to attend a convention like this, or to meet some of the folks who wrote the fantastic stories that helped shape my imagination.
It’s great to be a dad!
Posted by J.P. at 2:45 PM