Recently my wife Stephanie was able to take our son Paul to Disney World for his third birthday.  It was a grand time with her parents and aunt there too.  Expenses were reduced since Steph’s family lives just an hour away from the park and with a four-day pass, my son was able to enjoy Disney saturation.  Although I wasn’t able to make the trip, I enjoyed a stream of photos Steph sent back to me as well as a good bit of video from the trip once the trip was over.  I hated to miss the trip and after seeing the pictures and video, I wished even more I could have been there. 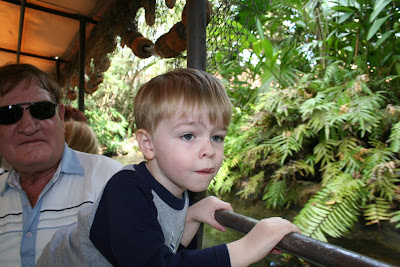 Aside from wishing I could have gone, seeing the video was interesting to me for a number of reasons.  Since long before our son was born, we had heard from a number of friends how Disney World had really changed from when we were kids: how it had become too commercial.  The videos were my first glimpse into that world since my own childhood, or at least an unfiltered view that wasn’t presented to me through the media to accompany marketing or a story (with an agenda) of some sort.  The video Steph brought home was about Paul, not Disney World.

Based on the small volume of memory I have about my own childhood experience at Disney World, the park seemed to be less of a fantasy or dream world, and more of an amusement park.  I don’t know that it appeared any more or less commercial though, just bigger.  Watching Paul, it was absolutely a magic kingdom for him--the Magic Kingdom--and nothing less.  He didn’t see actors in suits, he saw Mickey Mouse, Woody, Buzz Lightyear, and any number of other characters who were very real.  Steph and Paul went to the park several times and each time for my son was just as exciting as the first, seeing many of the same, and several new characters each visit.  His birthday is now weeks behind us, we’re all back together again in Germany, and we know without a doubt Paul’s experience remains fresh; we know he even dreams about his time at Disney World and wakes up telling us stories and asking questions about where various characters are or what they’re doing today.

So is Disney, or specifically Disney World, more commercial?  Probably.  The machine that is The Walt Disney Company seems to be much bigger now than ever.  Or more valuable in terms of its financial worth.  I don’t have numbers to back this; it’s my perception.  The scale/scope of the company and all it does just seems huge compared to what it’s been through past decades--theme parks globally, movie/film interests, comic/graphic novel interests, gobs of merchandise, etc.  But I have to ask, so what?

Watching my son, and living a bit of my own youth through his eyes so many years later, I’m not convinced that anything has really changed from the perspective of a child.  He saw nothing commercial; he was in a real, living dream.  When he watches some of Disney’s movies, he sees other glimpses of a magic world and isn’t concerned or distracted by the things that aren’t in the realm of the possible.  It’s all about his young, fresh and very active imagination.  Anything is possible!

I’ve learned that whatever I think of Walt Disney Company today, what I see is through my adult eyes.  My son, with a full three years under his belt, doesn’t see the machine behind the magic in the Kingdom.  His experience now was mine so many decades ago.  If I find I do or don’t like the way Disney conducts the business behind the magic, that’s for me to deal with.  But I am convinced when the fruit of Disney’s efforts bubble up in the world of kids today, at least at Disney World in Florida, they can proudly declare success.  Disney has preserved a world where kids can come and get lost in the magic, with none of the worries or distractions that too often burden us as dads; they don’t see the machine behind the magic.  As a result of not being able to go this time and how much shear fun my Paul had, Stephanie and I are planning to take him back next year for his fourth birthday.  It’ll be a long, expensive, and somewhat complicated trip for us, but that’s how it goes--we’re the adults.  For my son though, it’s simply a return to the Magic Kingdom.  I can’t wait!