One of the things I fondly remember about my own childhood is the freedom and opportunity I had to take adventures.  Not safaris or exotic trips with my parents, but adventures in our yard as a young child, then later in parks and woods that surrounded the communities we lived in.  In fact, literally my earliest enduring memories come from when I was three years old: memories tied to those adventures in the yard right outside our house.
Looking back on those memories today, and realizing that my son is the same age now as I was then, I’m in wonder over just how young we are when our immature imaginations are fully-functioning.  I’m also compelled to try my best to foster and protect an environment for my son that allows the same imagination opportunities.  And so, the emphasis for quite a bit of our “dad and lad” times has changed as he’s grown these first three years.  Now the emphasis more and more often is for adventures, and they’re taking two forms:  on the playground and in the woods.
The Playground
Not too long ago a new playground went up just a block from our house.  It’s fantastic.  Paul calls it “the Great Towers” because the playground is dominated by one particularly tall tower that hosts two large twisty slides.  That structure is accompanied by other relatively tall towers that support rope and wood bridges, climbing ropes, webs and walls, and ramps and steps.  There are also swings, see-saws and a two-level ship.
Paul is at a great age to enjoy the playground.  Parts of the grounds are specifically designed for toddlers, and the variety of structures advance from there to accommodate children of increasing age.  Short of being run over by larger kids, if the playground continues to hold Paul’s interest, he can continue to play on and enjoy it for the months and years ahead.  New challenges and opportunities are always there for him as he grows. 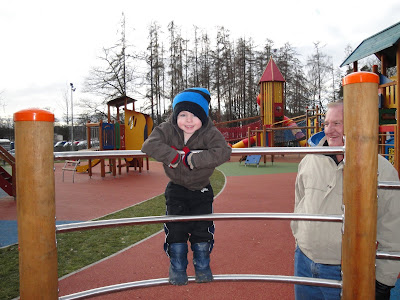 For now, Paul often asks me to go to the Great Towers, where I get to watch and participate in his adventures hiding and climbing through “smokey caves,” climbing the big wall or stairs, or playing as a pirate driving the ship.
The other venue for adventure is nature itself.  One of the greatest things (and there are a lot of them!) we’ve enjoyed about living in Germany is the cultural fondness for green areas.  Our community and the others we’ve visited and traveled through have wonderful parks within, and are often surrounded by significant and deep woods.  The parks are always grassy and generously complemented by benches, fountains and flowerbeds for everyone to enjoy.  Even in the towns and cities, there are great parks full of flowers, smaller grassy areas and benches, perfect to sit and enjoy a few moments (or hours) of rest. The Woods
And then there are the woods...  The woods outside of town are very well-managed natural wooded areas; not planned or man-made green zones.  Within these woods run an amazing network of well-maintained gravel and dirt trails.  (I’m pretty sure you can hike or bike to just about anywhere in Germany from any other point in Germany and never leave the trail!)  We’re fortunate to have trailheads into two of these wooded areas within a short walk of our house.  And so, we also go on adventures in the woods. 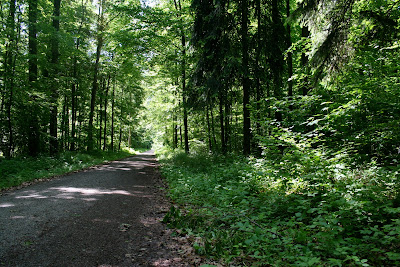 Depending on what’s fresh in Paul’s mind the woods are just woods, but they might also be the Hundred Acre Woods (of Winny the Pooh fame), or a primeval forest.  The woods are a fantastic world for a three-year old to enter:  a world almost entirely lacking man-made things.
The woods are full of sights and sounds not impeded or overwhelmed by the urban world.  What this means is in the woods there is nothing hindering or competing for Paul’s imagination.  The only limitation is his own mind and where it can wonder.  At times the trees are just trees.  At other times they’re giants.  I’ve seen sticks become guns, trucks and binoculars.  Similar freedom of the mind causes rocks, flowers, birds and bugs to be what they are, or to transform into other things.  In the woods we’ve seen Winny the Pooh and Tigger, dragons, and an assortment of monsters.  Last year the pollen was rain from the trees and magic dust, and most recently a small, springtime swarm of damselflys became faeries in flight. 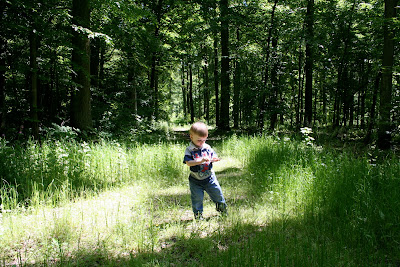 So it’s all about imagination, fueled by adventure.  To some selfish extent it’s also about taking time to adventure with Paul because it’s fun and is great time to bond with my son.  Because of my career and the associated (usually traditional) time at the office and away from home, I jealously guard time I  have with Paul in a way that is similar that I’ve always sought to protect time with Stephanie over other competing demands.  It seems though that our dad and lad time is unique and as important as the time the three of us spend together, or that Paul and Steph get to spend together.  Paul ends up with the full benefit of what Steph and I bring to him together as husband and wife, but also the unique benefits of special time with each of us alone.  For those dad and lad times, we have been and will continue to spend lots of it taking adventures.
It’s great to be a dad!
Posted by J.P. at 11:31 AM