Tupperware: it’s like Legos for kids who aren’t old enough to play with Legos.  I remember playing with my mom’s Tupperware; I watched my sisters do the same thing as they grew up, and now my son is enjoying the childhood same rite of passage.  The activity is evolving as he grows.  It began with the simple game of open the cabinet and pulling all the Tupperware out.  That was it.  Eventually it became a game of nesting shapes, and today the various containers are the building blocks for all sorts of things from castles to machines.
To be best of my recollection, when I was a little guy my mom kept our stockpile of Tupperware in a large drawer.  It was a constant source of plastic shapes to build cool things with based on an idea; at other times it was the chaotic resource pool that fueled the imagination. 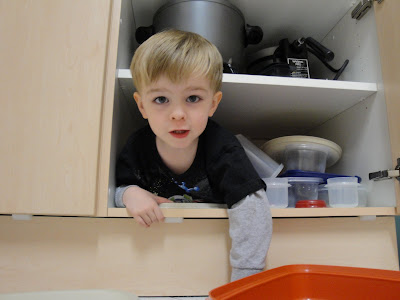 Today I watch my son enjoy the same right of passage, the only difference being that we keep our Tupperware on the lower shelf of a cabinet.  The plastic goodies are a constant source of entertainment, and the cabinet is an added benefit.  Unlike the drawer I remember, the cabinet is an adventure all by itself.  With a door on both ends, it serves as a tunnel, a cave, a castle, and probably a handful of other things my son hasn’t expressed to me.
The day will come soon when Paul will graduate from Tupperware to something better--probably Legos since they were one of the few toys I grew up with that contributed the most to my active (overactive?) imagination.  In fact, I think Legos were probably the most important toy for me in this regard.  I still think back to some of the incredibly amazing things I remember building with what today are the most basic of Lego blocks.  I’m pretty sure if I had those same Legos in hand today, I wouldn’t be able to duplicate my childhood work.  What’s honestly not clear to me though is if what I built was all that amazing, or if my young, fresh imagination made the fruit of my labor somehow better than it actually was.
Tupperware, and later Legos, helped me make my ideas real.  Whether I was inventing something new or trying to recreate something I had seen that captured my imagination, these most basic of toys helped ensure my young life was truly only limited by my own imagination.  I look forward to the not-too-distant future when I have the chance to present my son with the next set of imagination tools as he graduates from the Tupperware shelf.  The challenge for me as I’ll probably relive some of my own childhood, is to stay out of his imagination’s way and let it soar.
It’s great to be a dad!
Posted by J.P. at 7:35 AM