Too young for tech?  I’m not sure I know what that means, but I hear the discussion all around me at work and on the web.  I know this:  I routinely lose control of my iPod Touch to my three year old.  What does he do with it?  If you ask him, he’ll tell you one of two things:  he needs to kill bad guys, or he wants to play “hoopa-loops”.  In both cases he’s referring to a couple of games I have on the Pod. 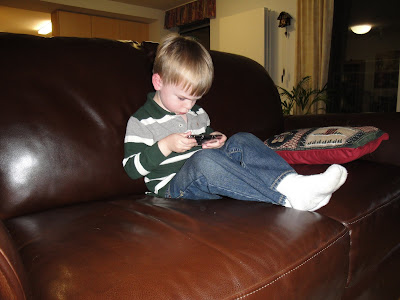 When I have the chance, I’ve joined the discussion and asked what people mean when they make statements about our little ones being “too young” for access or exposure to a variety of technology.  What the discussion eventually turns to is either content or cost.
The matter of content is pretty straight forward.  Allowing kids access to age-appropriate content while working to keep them away from inappropriate content is nothing new.  It was true with radio prior to television (even though I get the distinct impression the problem was simpler at that time), then with the proliferation of television and the broadening of its associated content, and now today with the web.  But nothing’s really changed; as parents we want to foster and fuel the development of our kids’ minds, but also want to protect them from things that’ll cause harm whether in print, through audio or video.
Darn it, this is complicated.  While it’s appropriate to lump kids of certain ages together for all the right reasons, every kid is still unique.  And so are parents, home environments, neighborhoods, etc.  Macro “rules” for exposing kids to a variety of things only apply on a macro level.  Dads, or at least for this dad, the real work for is the complexity of making these generally wise rules apply very specifically to each of our kids, to do it in concert with our spouses if there is one, and to juggle how this plays out when we have multiple kids in the household.  Ah, the historic friction between older and younger siblings--does access to technology complicate it?  (I can hear it now, “Dad, how come he gets an iPod and I don’t?”)  Content matters and each child is clearly different whether we’re talking about our own kids, or our kids relative to their friends.   And the access to the breadth of content out there through today’s computers is faster and fuller.
As for cost, it often comes down to this:  will I hand an expensive piece of tech to my child knowing he may very well break it?  Nothing special there: kids break things, even expensive things.  I can’t afford for my son to destroy something expensive.  Sorry son, you can’t play with this.
I guess I’m generally comfortable with how my son currently interacts with a variety of media through the TV or web.  My wife and I control it well (so far).  The question I still wrestle with though:  is today’s tech simply this generation’s version of the TV babysitter, or is it more complicated than that?  Does anyone remember the HBO series “Dream On”?  Hilarious, but an interesting commentary about a child raised by the television.  If we’re tempted to use tech, and specifically the web as a babysitter without real oversight, I wonder if we’re at risk of building the next generation of Martin Tuppers?  I’m reminded every day as my wife and I raise our son that parenting is complicated, a full-time job, and it’s just plain hard.  But we enjoy it; it’s also incredible fun for both of us, for Steph as a mom, and for me as a dad.
It’s great to be a dad!
Posted by J.P. at 4:30 PM