I have a short list of things I consider the simple pleasures in life, and most (if not all) of them are usually thought of as “guy things.”  A good haircut is one of those simple pleasures.  By today’s standards it may be the least obvious, but it’s on the list:  my hair is very short, and most barber shops are anything but a pleasant experience, from the barbers’ ability to the shop itself.  But to find a good barber at a good barbershop is well worth the time and expense.  Related, two thoughts come to mind for me as a man, and as a dad. 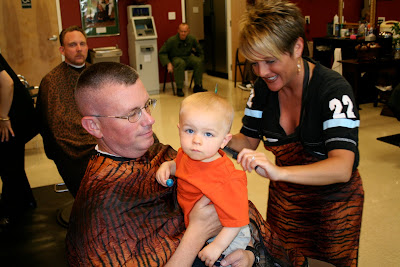 First:  a good haircut is one of the few simple pleasures of old that has endured for we men.  It’s also a sort of ritual: a rite of passage in a way.  Barber shops used to be bastions of manhood and a temporary refuge within his community.  It was a place to escape the busy day, cross paths with a few friends, enjoy a leisurely and manly conversation, and perhaps even a fine cigar and even a drink!  Afterwards, he could walk out feeling a little more prepared to meet the world head-on.  The barber shops of my grandfather’s day and the micro-cultures of manhood they contained are essentially gone, but if you look hard enough a few good ones remain.  A good haircut from a good barber (especially in a good barber shop) remains something special for a man.  Admittedly I might hold this view because I have short hair and get my hair cut very regularly, which has driven me to strive to find good barbers wherever I go.  But then again, maybe not.  After all, there’s nothing special or fancy about the haircuts I get, but the kind attention a good barber pays to the craft always ends up relaxing me.  I’ve been lucky to consistently find good barbers everywhere I’ve lived, and once I’ve established myself as a regular customer, the extra attention and care is pure gold:  a slower and more careful haircut, and best of all a scalp massage.  I often joke with my current barber that the haircut she gives me is better than beer, and afterwards I have to get a coffee to bring myself back to operating speed.
Second: I’ve always wanted my son to grow up enjoying getting his haircut and practically speaking, not to be one of those kids that fears them or throws a tantrum in the barber shop.  I know the day will come when we’ll disagree about his hair--length, style, etc.--but from the start I wanted him to grow up enjoying the experience of getting a haircut, so I started preparing the battlefield early and at home.
When he was about 10 months old, not long after he started walking, I would lead him into the bathroom while I shaved.  For years I’ve been using an electric razor and my plan was to expose him to the sound it made as well as what it felt to touch while it was running.  He would look at the razor and see me running it over my face.  It didn’t take long before  he wanted to touch it.  Since his own curiosity set the pace and he asked, I began gently putting the side of the razor against his head, the back of his neck and his back.  The results were great:  he smiled, giggled and would touch it with his hands.
I would also try to schedule haircuts so that I could take him to the barber shop with me, or so Steph could bring him by while I was getting my haircut.  Even before he ever needed his first time in the chair, he was routinely exposed to the barbershop environment and could see me enjoying the experience.  The barbers in the shop would always take the time to talk to him when we came in and left.
Then the day came that Paul needed a trim.  Instead of doing it at home I took him to the barbershop.  I called in advance to let my barber know I was bringing Paul and wanted to schedule time for two haircuts.  I was optimistic that Paul would just take the experience in, but also knew that the best planning might not survive contact with reality.  There was time in my schedule, and in my barber’s, for Paul to decide he didn’t want to cooperate.  I stayed in the chair after my haircut, took Paul in my lap, and we began the experience of his first haircut.
It went as well as I hoped it would.  Paul sat still and completely enjoyed the entire experience.  Since then we’ve moved and he’s gone with me to different barber shops; his attitude hasn’t changed.  In fact, when he doesn’t need a haircut but knows I’m going to get one, he asks to go with me.  To this day, every barber he’s been to comments to me about how well-behaved he is in the chair.  If we ever have another son, I would do it the same way.  I know I might not have the same results, but have no reason to think I wouldn’t.  At least for now though, I’ve met the two goals contained in my second thought above:  short term I have a toddler who doesn’t throw a tantrum at the barber shop when it's time for him to get a haircut, for fear of the sights and sounds of the experience; and I’ve set the stage for my son to enjoy the barbershop experience for the rest of his life.  And I enjoy the side benefit of just one more thing we get to do together during “dad and lad time.”
As an interesting side note:  when I was in college, I had the privilege for a few years of going to a barber shop and getting a quality haircut from the owner--the same man who cut my grandfather’s and father’s hair.  Good barbershops endure, and they’re worth seeking out.
It’s great to be a dad!
Posted by J.P. at 9:19 AM